Situation
Should I upgrade my aws EC2 instance (production system) to ubuntu 18.04.2 LTS?

When I log in, I get a message that the ‘18.04.2 LTS’ release is available.
A second message says “Run ‘do-release-upgrade’ to upgrade to it.”

If no? Being able to answer yes to all three of those questions is a much more productive use of time than thinking about a version upgrade without a concrete reason to consider.

If yes… I have a middling-strong recommendation against it. OpenEMR runs in the Dockerized environment, and won’t enjoy any benefits from the upgrade, and the AWS tooling is tested only on and specifically against Ubuntu 16.04; while I don’t see what would break it may well be that a backup created on a Ubuntu 18 system will fail to recover on a Ubuntu 16 instance.

Proving this true or false won’t be hard… as long as you have a parallel instance you can test your backup and recovery process on, and are familiar enough with the process to be able to test it on terms of your own choosing – changing the variables, seeing what happens, and knowing enough about the process to catch a non-obvious fault, and recover from one if a fault is discovered.

In truth, the odds are very good that the upgrade will go flawlessly, but if it /does/ introduce a problem I’m dreadfully certain it’ll be in the interaction between the host system and the container, instead of something within the application container, and the pool of people able to help you diagnose that is… thinner than you might prefer.

Wow. Thank you for this detailed answer. In other words … there appears to be no good reason to upgrade at this time and I’m leaving this alone.

Did you ever upgrade to the ubuntu 18?

No I did not. I trust the OpenEMR developers to tell me when it is okay to do so (unless I had an important reason to update right now, which I don’t). I suppose I could test it myself if it is absolutely necessary. Maybe @jesdynf can “update” us on where we stand on AWS Unbuntu version upgrade at this point?
RBL

I trust them as well. I just have read quite a few of your posts here because of the relevant questions you pose, and the solutions you catalog as they lay the ground work for those coming behind you. I asked more for curiosity because Ubuntu 20.04 LTS is reportedly slightly faster from a boot perspective, and I did not want to make the assumption that I should ignore the offer of the upgrade. With as many features and security fixes as the Openemr developer team tends to roll out, I doubt there is time to document everything so better to ask than miss out.

We are in fact covered well, from a security perspective, as shared below:

believe you have to sign up for ESM, you may see a message like this when you ssh in

I tried to sign up for ESM but could never get it to work. I had problems creating the Ubuntu account. Couldn’t do it.

Well, I am glad I followed-up. Thank you to you both!

Hmm. I really can’t put this off any further, can I.

Tell you what, I’ll see about testing this out this week. I’m going to make the assumption that if I can launch a clean Express and Standard and OpenEMR still functions after an Ubuntu 20 upgrade and reboot that everything’s probably fine.

Hey @jesdynf, did you test the Ubuntu 20 upgrade and reboot? If so, did it work?

In case it helps, I run all of my development OpenEMR stuff on Ubuntu 20 LTS. I have not verified every aspect of OpenEMR though for a production type setting so don’t know if you will run into problems with it on AWS or not, but just thought I’d mention that if it gives you any degree of confidence.

That is a huge confidence boost

I want to add that going from 16.04 LTS to 18.04 LTS doesn’t pose to be difficult keeping current sequel engine however, one needs to make a decision at some point before 20 LTS in regards to when do I upgrade my PHP and MySQL/Maria.
PHP is straight forward however, sequel engine, not so much and depends on approach. There are lots of folks running production on 20 LTS.

Thank you, Jerry. This is very helpful. I think I will start by upgrading to Ubuntu 18.04 LTS and then wait for a bit.

You’re welcome. Should only take an hour or two!

I upgraded from ubuntu 16.04 to ubuntu 18.04 LTS on my AWS OpenEMR 6.0.0(2) Cloud STANDARD production system, and the upgrade was smooth and very fast. It asked a few questions about ssh (I picked the default options) and “locally modified” versions of obsolete files like grub (I picked the “maintainers version”). Not counting backups, it took only about 15-20 minutes on an AWS t2.large instance (Intel Xenon 2 CPU w 8GB mem and 2x200GB volumes).

for grub you should choose locally modified versions, you may have a problem when you reboot

edit, actually in the future this is a better approach: 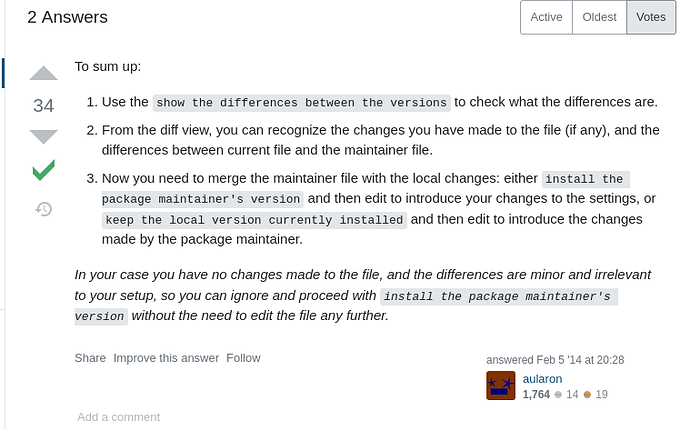