Side by side forms on a tab

Is it possible to arrange two panes, both displaying different forms containing information pertaining to the same visit, simultaneously and side by side on one tab? The what and why follows …

I have a variety of custom forms that have worked well for me for several years. For the purposes of this discussion, one is a “worksheet” upon which I can write notes in shorthand while I’m speaking with and examining a patient. I usually have an iPad and Apple Pencil with me while examining patients so this isn’t difficult. At some point, however, I return to my back office and more formally dictate the visit onto a short variety of different custom forms suited for the purpose at hand (ie, history, physical exam, procedure note, reviewofs, etc.). While doing so it would be a tremendous benefit to have my shorthand note form ready and available for review while dictating. I can more or less accomplish the same thing by logging onto OpenEMR both on the iPad and my desktop computer and then dictating from my iPad notes onto the forms open on the desktop computer. I’m not enamored with this solution, however, as it opens up the possibility of dictating one patient’s notes into another patient’s record.

As an aside, from time to time (infrequently) I have actually seen two different panes situated side by side on the screen, both seemingly on one tab. I have no idea how I have been able to do it, however, as it is very infrequent and almost appears to be more of a random bug than a true feature. I also don’t know if this “feature” could be utilized to simultaneously show different forms from the same visit simultaneously. I can’t reproduce the behavior reliably so I can’t figure out how to expand upon it and turn it into a useful feature.

definitely be a nice feature, for a workaround lock the pt dashboard and the encounter tabs, then use generate report to see your visit like below 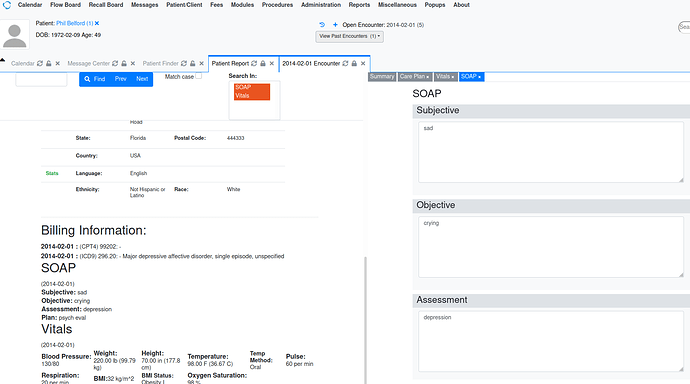 Thanks. This appears to work for me. It’s a little bit clunky but it will probably meet my needs for the moment, at least until I cobble together something more to my liking. I wonder if the infrequent bug described above was simply just me accidentally clicking on the lock button (that I had never previously noticed)…