Dear colleagues,
I use new fresh 5.0.2 and have some troubles with LBF forms. I would like to configure form based on IMAGE CANVAS type field.
After group, filed definition ( see image 1) there is no image present in image canvas editor at all (image 3)
I have tried different image sizes, types and canvas size definitions. But without success.
It is strange that non edited picture is present in visit summary after saving of “blank form” mentioned above. (image 2)

I tried clear cache of browser and different browsers as well.

Can you help me please ? Tomas 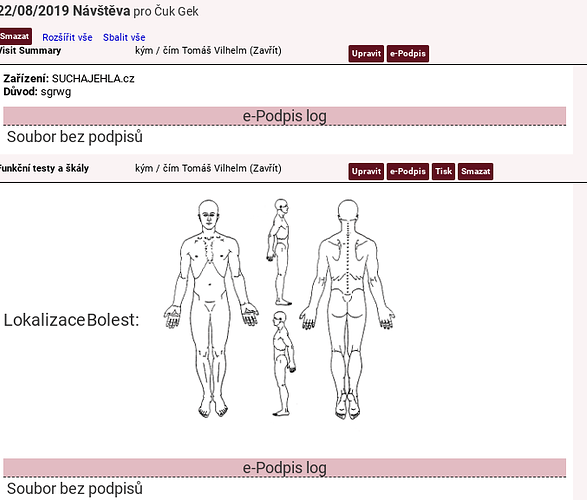 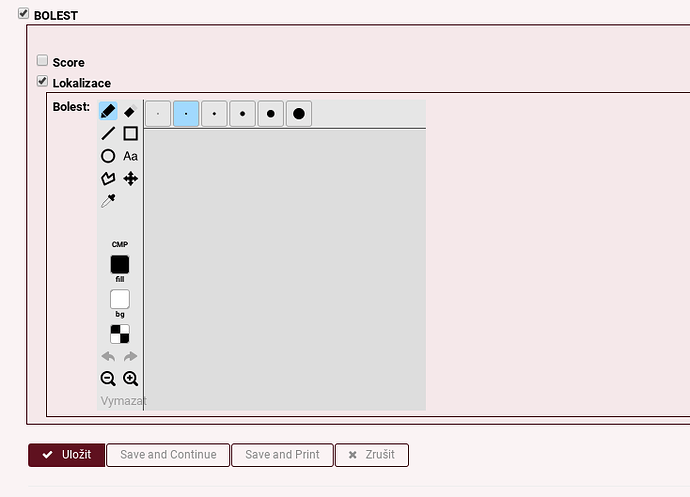 Are you following the instructions in this thread ?

Draw On Image In Form Management and Administration

btw, @sunsetsystems , this is an awesome feature that you added to LBF!

Hi Brady,
Of course I have followed it

But image editor is still blank. After saving of this blank template is non-edited image present in visit summary or printed report .

It runs on Linux Debian 10 buster
mariadb and php 7.3

Sorry, I haven’t had time to test this yet. Did you confirm this bug on one of the demos:
https://www.open-emr.org/wiki/index.php/Development_Demo#Demo_.28Alpine_3.10_-_uses_php_7.3.29

Hi @brady.miller,
I have tested on https://www.open-emr.org/wiki/index.php/Development_Demo#Demo_.28Alpine_3.10_-_uses_php_7.3.29
I can not confirm bug there. Everything works fine.
I have opened file for patient John Smith and prepared LBF form Pain Assessment. It works. Problem will be somewhere in my config. I have to investigate. Should be there some rights settings for images in /sites/default/images ?

Try turning on Globals->Logging User Debug to see if helps debug. It sends php and window errors to display for easier troubleshooting.

It seems to be problem of rights.
Image was not accessible by user but only root.
I removed record of image source from layout_options table as well.
Now it is working finally.

Hi @brady.miller ,
I have investigated little bit deeply behavior of IMAGE CANVAS form.
it wors fine only if it is a part of 1st group in the LBF form.
After movinng it to lower groups , behavior is as mentioned in my 1st post.

I have the same issue with Ver 7.0.0.0 patch 2 I have followed the thread https://community.open-emr.org/t/draw-on-image-in-form/11292/9 to no avail. The image does not appear in the editor. It does appear in the report. It does not allow any editing or drawing on the image.

My problem was that the Image Canvas field would not show the image. I followed the setup guidance given here: Using Image Canvas frustratingly it did not work.

The image data was going in to the database, but not loading into the editor and therefore impossible to draw on or save.

I concluded it must be a dependency in ‘Literally Canvas’ which depends on React.js. So I updated React.JS. I thought it was working, it seemed to momentarily.

I think it might be the version of node.js and needs to be installed with npm using NVM so that you cane set the version.

Rather than break my server I will build a test VM to experiment with this. If anyone knows the version of node.js that works with Literally Canvas that would be very useful.

I don’t recall react being a dependency for Literally Canvas(doesn’t mean it’s not). If I recall there was an issue with the dependency project itself back in v6 or about then dealing with the scope the canvas was running under(or not).